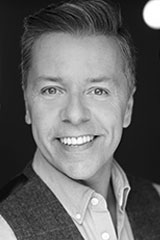 His first professional engagements were at Bournemouth, Stevenage and Blackpool in pantomimes and various summer shows.

Craig then went on to perform in London’s West End in shows such as 42nd Street (Original cast at Theatre Royal Drury Lane), Me & My Girl (Adelphi Theatre), La Cage Aux Follies (Palladium Theatre), Mack And Mabel in concert (Theatre Royal Drury Lane) and Man of La Mancha (Peacock Theatre) of which he recorded the cast albums for both ‘Mack And Mabel’ and ‘Man of La Mancha’.

Craig spent more than two and a half years playing the part of ‘Doody’ in the hit musical ‘Grease’ where he received the Golden Quiff Award for best performance, which was presented by the late Victoria Wood.

Craig has devised, directed, choreographed and performed in many musical revue shows throughout Europe and the United States. His US theatre credits include ‘Song & Dance’ as jazz dancer role (US national tour), ‘42nd Street’ as Billy Lawlor (US national Tour) and the original New York (Broadway) production of ‘Follies Royale’ playing the juvenile lead role of ‘Joe’.

While in the United States, Craig was engaged to perform as backing vocalist and warm up performer for the Caribbean national tour with ‘Gladys Knight’ in her award winning one woman show. After which he then toured in the same capacity with Jennifer Holliday from the original Broadway ‘Dreamgirls’.

Craig’s television debut was in the early days of ‘Grange Hill’ for the BBC. Further TV credits include ‘The Les Dennis & Dustin Gee show’ for BBC television, ‘The Price Is Right’ as a dancer / game show host with Lesley Crowther (Talbot Television / ITV), ‘Tales of out Of School’ (Drama for Central TV), ‘Dancers’ (Drama for Westward TV), ‘C.A.T.S. EYES’ playing ‘Steve’ the office boy for TVS and ‘Eastenders’ (featured character) and ‘The Christmas special’ for the BBC.

He also appeared in two Royal Variety Performances at the Theatre Royal Drury Lane for the BBC and ITV and 'A Royal Performance' at the Adelphi Theatre.

Commercial Television includes Barclays Bank (Central TV) and Texaco Oil (NBC Films), which is still extensively screened in the US.

In film, Craig played the part of Nigel in Monty Python’s ‘The Meaning of Life’.

In 2002 Craig was honoured when chosen to stage and choreograph ‘La Traviata’ for the Ukranian opera company and Opera international at the famous Royal Albert hall in London, which then took him onto choreograph and stage the International tour of ‘AIDA’.

Craig’s experience has enabled him to travel the globe extensively whilst being involved in performing, choreographing, directing and producing for the inaugural production set up for most of the World’s leading cruise lines.

He has had the privilege to have met and performed for every member of the Royal family in the UK, also the Royals of Spain, Denmark, Greece and Monaco.

Craig is a professional adjudicator for the British and International Federation of Music, Dance and Drama Festivals Worldwide.

He regularly lectures on dance and Musical Theatre subjects with the International Dance Teachers Association (IDTA) and has been part of the South East area Theatre Dance Council Committee (IDTA) for the last five years.

In 2015, Craig was commissioned to stage and choreograph the prestigious annual International Dance Proms at the Royal Albert Hall, working with over 500+ International dancers including Principals from the Royal Ballet, Matt Flint and the Lukas McFarlane Dance company. In 2016 and 2017, Craig was once again asked to repeat this role to create some outstanding choreography and staging once again at the Royal Albert Hall.

In Summer 2018, Craig starred on Broadway as lead vocalist and show host/compare in 'SMILE' at the Town Hall Theatre , NYC.

Craig played the part of Mingo in the ★★★★★ CRAZY FOR YOU production at Chichester Festival Theatre in the summer 2022 season. ⁠It was directed and choreographed by the legendary theatremaker Susan Stroman (Young Frankenstein), with music and lyrics by George and Ira Gershwin and based on a book by Ken Ludwig. ⁠Co-conception by Ken Ludwig and Mike Ockrent. Inspired by material by Guy Bolton and John McGowan

Craig is also co-Principal of Starquest Performing Arts for three to 16 year olds and oversees branches at Sheppey and Rochester and he was the full-time Course Director of Starquest Performers College in Chatham which provided students with vocational training for students aged 18 plus.

I hope that you too achieve your dreams…